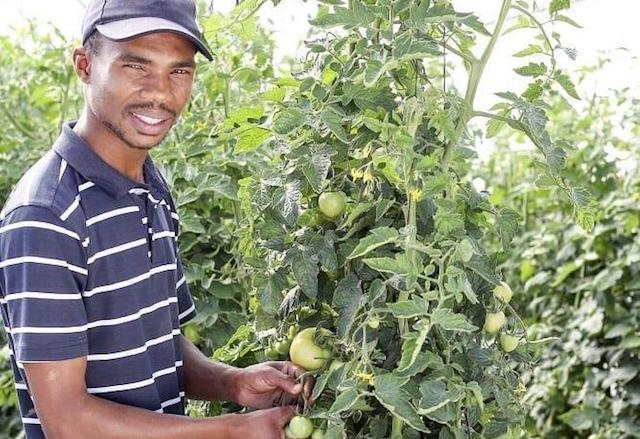 Yandisa Langa is the founder and sole owner/beneficiary of Langa Mountain Tomatoes in Tokai. This project produces and supplies tomatoes to local vegetable stalls, supermarkets and restaurants, and has created jobs for three employees in the area.

Langa is a born entrepreneur and worked as a security guard at one of the local malls when he spotted a niche in the supply and delivery market. What inspired his idea was enquiries about the delays in food deliveries and the shortage of vegetables, etc. He decided to resign from his position and started a project way back in 2016.

Langa approached several companies and pitched his business idea, as he needed financial assistance to start up his business. Langa knocked on every door until his dream became a reality. He never stopped exploring avenues, which enabled him to reach greater heights in his business to produce tomatoes. Over the years, Langa has faced many challenges such as the lack of marketing strategy, competing with big farms and pricing strategy.

In mid-2017, Langa Mountain Tomatoes was funded by the Comprehensive Agricultural Support (CASP) /Ilima grant funding through the Western Cape Department of Agriculture. Approximately R120 000 was approved by the Food Security Commodity Project Allocation Committee to assist the project to procure material for a complete tunnel infrastructure, garden tools and production inputs.

Langa entered into a memorandum of agreement with Casidra as the implementing agency. Cynthia Lebenya was appointed as Casidra’s Project Manager and together with Karel Abels, Extension Officer from the WCDoA, ensured the successful implementation of the project.

We thank Cynthia and Karel for meeting the beneficiary’s expectations by delivering everything on time. Langa’s project has had exponential growth and currently grows spinach, peppers and cucumbers. His orders increased from weekly to bi-weekly and he began supplying other supermarkets. His future plan is to acquire a bigger piece of land.

We wish Langa Mountain Tomatoes everything of the best with the business’s growth and success in the future!

CASIDRA DID IT AGAIN DURING ITS 30 YEARS OF EXISTENCE