According to the South African Sensus of 2011 and the 2016 Community Survey results, Asian immigrants represent a substantial potential market. Due to the large numbers of both Asian and African immigrants who have established the Western Cape as home, it is imperative that this market is catered for, to create produce marketing opportunities for emerging farmers and Small and Medium Enterprises (SMEs) in the province. The main outlets for both Asian and African migrant foods in the province are specialist grocers and restaurants. In addition to the formal grocers and restaurants, these products are also sold by informal traders.

In as much as the Asian and African migrant food market itself is not as large as the general market, it is substantial enough to present emerging farmers with a niche opportunity that when taken advantage of, may yield price premiums that would more than compensate the need for high volume production.

The following are the products that are primarily consumed by both African and Asian migrants in the Western Cape Province: 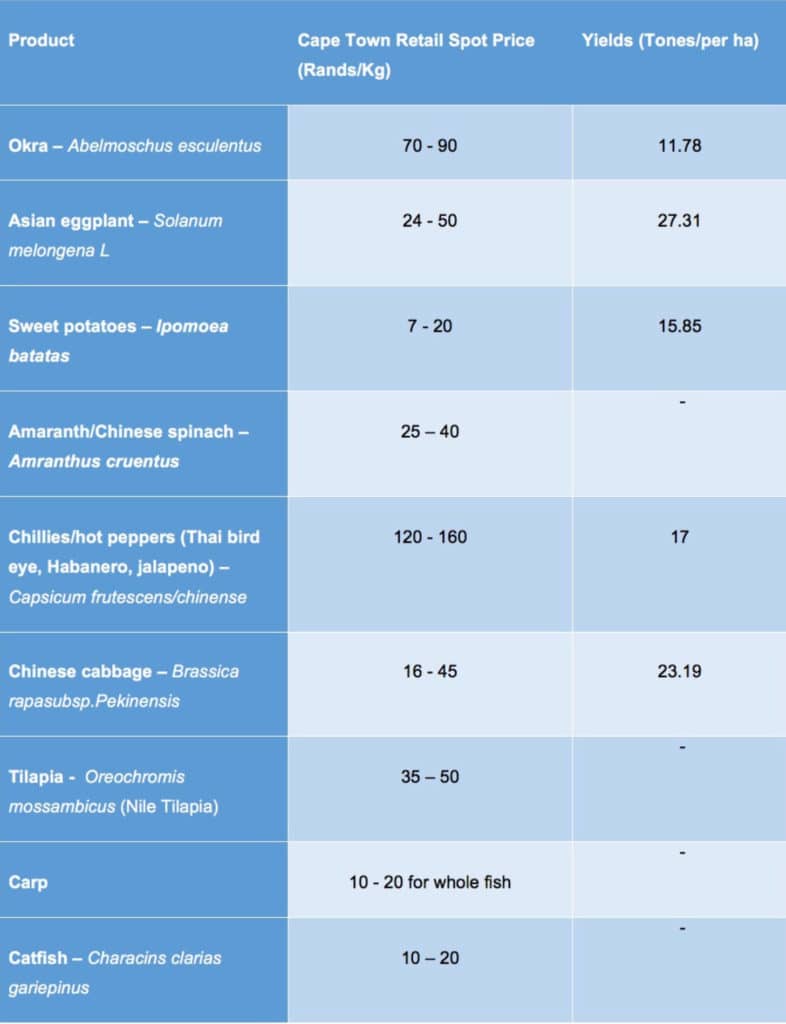 Although there are specific areas in the province that may be conducive for production based on their soil and climatic conditions, some of the above crops can be grown in controlled environments such as under shade netting. The above products do not generally fare well in Mediterranean climatic conditions such as the Western Cape conditions, except for specific identified areas. These crops command a price premium due to their non-availability in the normal marketing channels.

The land reform debate has received a lot of attention since the ANC’s elective conference in December 2017, where it introduced the concept of “expropriation without compensation”

This was followed up in February 2018 when the National Assembly adopted a motion for a constitutional review to investigate the possibility for the expropriation of land without compensation. The matter was referred to a joint constitutional review committee, to review section 25 of the Constitution and other clauses, if necessary, to make it possible for the state to expropriate land in the public interest without compensation.
It was especially the adoption of the above resolution which has resulted in heated debate on land ownership and redress for colonial and Apartheid land policies. How have we progressed with this emotive topic over the last 6 months?
The general interest in the debate is reflected in the fact that the parliamentary joint committee on constitutional review has already received 140 000 written submissions about possible changes to land ownership rights.

On the political front, the ANC has been attempting to bring more clarity to what it is proposing in terms of land reform and expropriation. It concluded a recent special land reform summit, pointing to the fact that it is proposing expropriation without compensation as only one of many other mechanisms to speed up land reform.
The ANC has also identified specific categories of land to be considered for expropriation without compensation. These include: Abandoned and hopelessly indebted land; state land; land held for speculative purposes, and underutilised land.

According to Enoch Godongwana, Chairperson of the ANC’s subcommittee on economic transformation, people should not expect land reform to be solved through a focus on state land alone. Says Godongwana: “The inevitable fact is that you can never address the land crisis by releasing state-owned land – you have to target private land. We can’t avoid the race dynamic – as we stand here, 72% of farm land is in white hands.” But at the same time, the ANC states that expropriation of land may not undermine future investment in the economy, damage other sectors of the economy or negatively impact on agricultural production or food security.

Opposition parties are also staking their claims on the topic of land reform and expropriation. The DA is emphasizing land reform in a market economy framework, and is against the concept of expropriation without compensation or the amendment of the Constitution. But both Western Cape Premier, Helen Zille, and Johannesburg Mayor, Herman Mashaba, have indicated that there are special circumstances where they might agree with the concept of expropriation without compensation. Both Zille and Mashaba were referring to the need to address the pressing need for urban land for housing on the one hand, and abandoned inner city buildings (Johannesburg City Centre) or unscrupulous land owners trying to hold the local government at ransom regarding vacant land on the urban edge (Philippi in Cape Town), on the other hand.
The concept of urban land reform has also gained prominence during the current debate. Max du Preez in his News24 Colom argued that a focus on urban land, rather than rural land, could result in quick wins for President Ramaphosa.

The proposal to amend Section 25 of the Constitution has so far been met with broad resistance, and many land reform experts, such as Ruth Hall and Advocate Tembeka Ngcukaitobi, have pointed out that the Constitution makes provision for expropriation of land by the state, but this power has not yet been tested. They also highlighted the fact that the Constitution does not make any reference to “willing buyer willing seller”, but rather speaks of fair and equitable compensation.

Projects completed in the last quarter