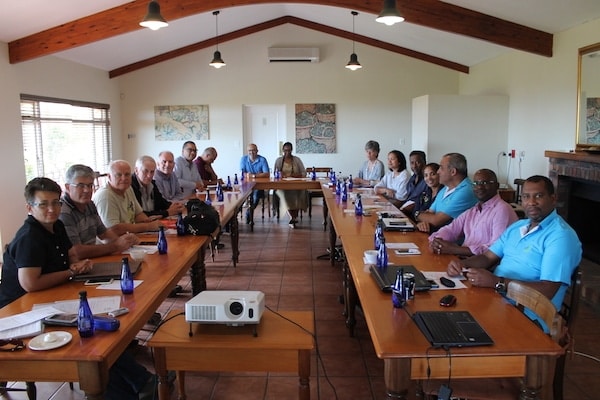 Towards the end of 2017 the harsh reality of the current and intense drought experienced by the Western Cape, continued to play out. Casidra supported the Western Cape Department of Agriculture (WCDoA) in the procurement and provision of drought relief feed to farmers to support their livestock through this difficult period. The conditions also required farmers to reduce their herds, some of whom at times had a few more animals than they should have. To this effect, the drought had an equalizing effect.

At the start of the year very sketchy predictions could be made of the weather patterns expected and more importantly, rainfall patterns for the year. This situation has caused a bleak expectation for the oncoming 2018-year for agriculture.

The most profound impact the drought had on Casidra’s work, was the delay in completion of Food security and household garden projects. These projects, similar to livestock projects, need the supply of a consistent supply of water as a prerequisite and this posed a major challenge. While many projects had boreholes approved, the demand for this service far outweighed the supply and became one of the single-most sought after services from farmers and later residential dwellers alike. Basically, all borehole contractors were inundated with requests for their services.

In early Autumn though, a few drizzles were experienced in and around the Cape but in the first week in May some decent rain started falling. The monthly average rainfall for May was even exceeded by 30% and this led to renewed optimism alongside the excitement of long-awaited showers. With it however the unfortunate natural occurrence of erosion washed away large volumes of topsoil, as the parched landscapes devoid of vegetation, were swept by the torrents of water.

Fortunately, riverbeds soon became saturated and water started flowing in many streams that were dry for long periods.

At Anhalt farm, the excitement is increasing in the build-up to the imminent transfer of the farm which is scheduled sometime in the middle of the year. Casidra concluded a training/development programme which was aimed at skilling some of the CPA and Anhalt Boerdery Pty Ltd. Members, assigned for managing the business. The new leadership took the reins firmly after stalwart an ex-Chairman, Abe October, passed away in late 2017. The enthusiasm and energy with which they dealt with tasks at hand were clearly evident. Though the spirits and attitudes were approaching a ready state for the transfer, the administration portion was found not to be keeping up with the pace. The Department of Rural Development and Land Reform (DRDLR), who is the legal owner of the land and which should effect the transfer, underwent a change in the Ministerial offices because of a cabinet reshuffle – this process happened at the exact time a submission for signature was presented to this office. The process has since been inching forward at slow pace.

The Langkloof-area has nonetheless experienced a good seasonal distribution of rain and resulted in the farms’ dam being filled to near capacity. This brought about enough irrigation for the season. The subsequent 2018 harvest has unfolded and resulted into an exceptionally positive yield. The pears, which is the first crop to be harvested recorded the highest yield since Casidra started managing the farm in 1993. Together with the excitement of the pending transfer of the farm, this season at Anhalt is likely to go down in the record-books as one of the most gratifying.

Casidra continues to implement projects for the WCDoA CASP programme within the commodity structures. A follow-up assessment has been commissioned to determine the success of the CASP programme in the province and the report is expected to be released towards the end of 2018.

Casidra embarked on its annual audit conducted by its external audit firms, but this year the office of the Auditor-General also employed its right to execute an audit alongside. This caused for some logistical planning to ensure all audit team members were provided a decent space to conduct their work.

2018 continues to be a challenging year in agriculture even though some decent rain resulted in the average dam levels to rise above 50% in July. This year Casidra keenly explores partnerships and attempt to find collaborators to expand its impact on development agriculture in the region.